My lifelong love of the ocean took me underwater to the front lines of tropical reef restoration. 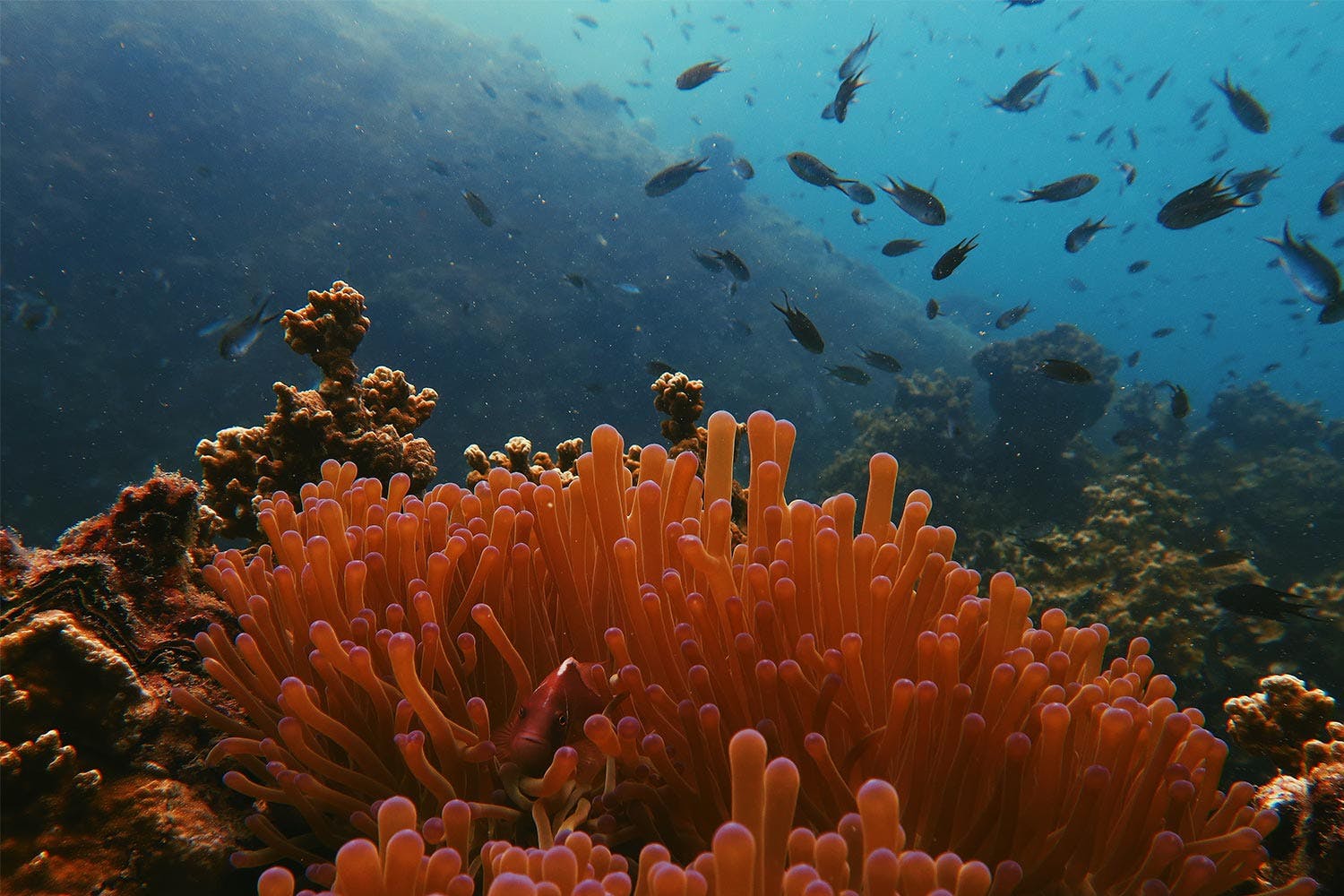 Photo by James Thornton via Unsplash

As a child, I swam at the beach all summer. My grandparents lived in a small seaside community in the Pacific Northwest, where I spent weeks in my swimsuit, running back and forth from the house to the water. My backyard ocean was a thriving ecosystem — full of kelp and barnacles, crabs and starfish.

Growing up, I also watched the disappearance of starfish on the Point Roberts pilings and dwindling pods of orcas swimming the Georgia Strait. It’s a struggle to witness oil spills in our waters and the impact of overfishing on BC’s marine life.

Oceans worldwide are facing a decline in biodiversity. Due to rising water temperatures and ocean acidification, large diverse ecosystems like coral reefs are struggling to withstand ever-increasing stressors. Yet, the steps being taken to address these issues are inadequate to stem the tide of climate change. Sometimes, I feel overwhelmed and helpless. I can’t help thinking North America’s heavy environmental footprint is shortsighted, engineered to serve capitalist systems that will fail us in the face of environmental collapse. Other times, I’m an idealist, asking, “What can I do that will make a difference?”

The answer is never clear, but I try to integrate environmental action into my daily life. So when my partner and I decided to become SCUBA divemasters, we sought certification alongside the New Heaven Reef Conservation Program, an environmentally focused dive centre in Thailand working with scientists and schools to educate divers about reef ecosystems and ocean conservation. Alongside our Divemaster training, we would help with coral reef restoration.

After three days of travel, we reached the Chumphon Archipelago along Thailand’s southeastern coast, just in time for a tropical typhoon, a reminder that weather patterns are getting weirder — and more severe — because of climate change. We had one more leg of our journey: a passenger ferry to Koh Tao. In Thai, “koh” translates to “island.” Koh Tao, or Turtle Island, is the smallest populated island in the archipelago with an area of 21 km².

When we reached the place we’d call home for the next four months, the streets were flooded, reefs were destroyed, and the oldest dive boat on the island, King Kong, had capsized in the storm. As its remains were being hauled out of the bay, we dove into the work.

Safety checks. Mask and fins on. Regulators in. We flash each other the O.K. sign, and down we go.

Diving in tropical waters feels akin to experiencing an otherworldly dreamscape of Seussian shapes in vivid aquas, yellows, emeralds, and pinks. Even with the wreckage from the storm, the magic was not lost. Everything is silent underwater. It feels almost reverent. When we sank below the surface, we saw firsthand how the typhoon had damaged the reefs. Branching corals had been torn apart. Coral fragments could be seen in all directions, littering the ocean floor.

We attended daily morning lectures on different aspects of marine conservation. We learned about marine ecology, and methods to protect and sustain reef health. I learned about many threats facing the coral reefs of Koh Tao. The coral itself is a colonial animal, meaning the larger coral structure is made up of many individual organisms called “polyps,” with tiny stinging tentacles used to capture and eat plankton. These polyps excrete a calcium skeleton, in which they live alongside single-celled organisms called zooxanthellae. They give corals their vibrant colouring and provide them energy through photosynthesis.

In order to survive, corals need to attach to hard surfaces like rocks and other solid structures to grow their skeletons. Depending on environmental conditions, a single coral species can grow in a wide variety of shapes and sizes.

All different types are present in the bay near Koh Tao, growing five to 20 metres below the surface. There are massive and submassive corals that look like dense lumps and bumps, branching corals with fingers reaching up towards the surface, flat table corals, small mushroom corals, and wiggly, cartoonish soft corals.

Suspended in the sea, sunbeams lace through the warm depths. A curious batfish looks on from a few metres away. All around me are corals.

Coral reefs create biodiverse habitats that a quarter of all marine life depend on for survival. They provide coastal protection, abundant food sources, and shelter to animals, including fish and invertebrates. Because of the reef’s protection, the storm damage to the island was less severe than it could have been. By absorbing wave energy, coral reefs protect tropical coastlines from erosion. But reefs also trap man-made debris. It’s not unusual for plastic bags, bottles, and netting to get trapped on corals and washed into the bay during natural disasters.

Sea temperatures, which are rising 24% faster than even three decades ago, are the predominant hazard to coral health. The coral animal is delicate; it can’t recover if conditions change too quickly. The stress from even a single degree rise in temperature can cause coral polyps to expel their zooxanthellae, turning their skeletons white in the process. This phenomenon is called “coral bleaching.” If the stress is temporary, bleached corals can still recover, but if the temperature increase persists, bleaching events can wipe out entire reefs. Tropical corals cannot survive long-term in temperatures above 30˚C, so rising water temperatures endanger the existence of entire underwater ecosystems.

Waterside developments also harm coral reefs, because runoff of sediment and soil can build up on the ocean floor, covering hard surfaces corals need to latch onto to grow. Grey water and sewage runoff kickstart the nutrification process, providing nutrients to organisms like algae and sponges that compete with corals. Because tropical corals depend on photosynthesis for nutrients, clear waters promote healthy coral reefs. Waters that are too nutrient-rich can become dominated by large algae blooms, suffocating coral colonies no longer able to secure energy from photosynthesis.

With 40% of people worldwide living along coastlines, we can understand how challenging it is for new coral colonies to grow. Then, there’s the impact of tourism: plastic pollution, boat traffic and anchoring, people touching corals accidentally (and on purpose)… even sunscreen can harm coral reefs. In summary, almost everything humans do stresses corals, yet corals make major contributions to the functioning of planet Earth.

Breathe in. Silence. Breathe out. Bubbles. This is my continual meditation. I remind myself to check my oxygen on a regular, but not regimented, schedule.

Every day, the conservation team would dive for up to two hours. The project time? Determined by your personal rate of air consumption. The slower you breathed, the longer you could work at depth before your oxygen tank would be depleted. I was grateful I had a yoga practice to rely on.

Our tasks ranged from a weekly ecological monitoring survey on coral health and fish populations, to tending coral nurseries by tying loose coral fragments to secure structures. This strategy encourages broken corals to regrow around new structures, and saves these fragments from bleaching. It’s amazingly peaceful, to sit on the ocean floor slowly sewing coral fragments onto a stable structure, giving them a second chance at life. It was satisfying to return to nursery sites after a few weeks and see corals beginning to grow around the metal and regain their health. Like growing a garden, progress takes time.

Over four months in Thailand, we saw and supported dozens of different school groups and a multitude of tourists who came through the basic three-day SCUBA training program at New Heaven. Students arrived as travellers looking for adventure and, after basic education on coral reef ecosystems, left as budding conservationists. I met instructors, interns, scientists, and volunteers who went on to publish research and make documentaries about the work we undertook.

Sadly, reef restoration efforts like the one we joined on Koh Tao are short-term measures. Corals are extremely slow to form, growing at a rate of 2 to 10 centimetres per year. Under ideal conditions, it can take hundreds of years for a large coral colony to regrow. As bleaching events become more and more frequent, scientists predict as many as 90% of tropical coral reefs will die in the coming two decades. The threat of climate change must be reduced or eliminated, if not, the scientific consensus is clear: corals will not survive.

It’s a bleak picture, but there are some things we can do. My biggest environmental takeaway from my time in Thailand was that reducing — or eliminating — our own plastic consumption might be one of the best things individuals can do to help our planet. Larger animals like turtles, sharks, and fish will mistake plastic for food, making clean-up dives more pressing for the survival of those who call coral reefs home.

When plastic trash winds up in the ocean, it can persist underwater for hundreds of years, with devastating impacts on marine life. It’s a big problem, but it can be addressed in part by any person in any part of the world.

Since coming home, I’ve focused on finding restorative ways to connect with nature. I started a patio garden. I got a dog. I take long walks in the forest. My work as a writer and theatre creator is ever more environmentally charged. And I swim in the ocean, still.

On February 15th, my swim at Wreck Beach in Vancouver was chilly. The water was barely above freezing and I could not feel my feet, but I submerged myself in the salty waves. Being in the ocean connects me to nature, to my home, to something more cosmic than my human experience. It is an experience full of wonder.

Support our work by subscribing, donating, or buying sustainable swag.